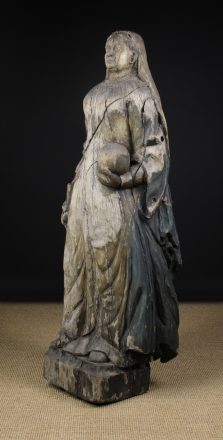 A 19th Century Ship's Figure Head carved in the form of Queen Victorian holding an orb and scepter (A/F), mounted on a square plinth base, 49 ins (125 cms) in height. [Purported to have come from a wreck off Scaborough where several ships with the name Queen were lost including British Queen (sank 1869], Ocean Queen [1865] and Queen [sank 1888].

Be the first to bid on this item!

For the next sale the viewing dates are:

Please note there are limited telephone bids being offered for the upcoming sale due to C19. All commission bids should be sent before the end of the day prior to the sale day to allow for registration. Dismiss